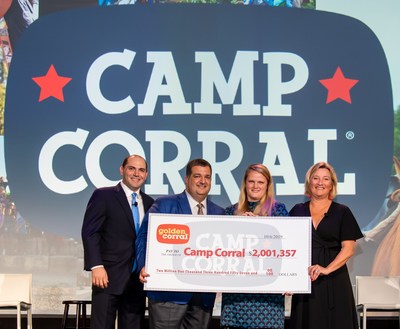 Donations for Camp Corral were collected from Golden Corral restaurants and their guests across the country, as well as through a partnership with DAV (Disabled American Veterans). This year the campaign raised $2,001,357 to support Camp Corral, which is now in its ninth year. This past summer, Camp Corral hosted held 21 camp weeks across 17 states, hosting 3,281 children. These camps provide kids, ages 8 to 15, a unique, weeklong experience where they are free to escape the challenges they face as military children.

«We profoundly appreciate our military for the sacrifices they make to guarantee our personal freedoms. We are grateful and indebted to military families for the role they play,» said Lance Trenary. «Through the tremendous generosity of our guests and restaurant teams and our partnership with DAV, we were again able to exceed our annual fundraising goal in support of Camp Corral.»

Golden Corral is a long-standing supporter of American veterans. The company became a founding sponsor of Camp Corral in 2011 and continues to provide generous support to the organization, a 501(c) (3) tax-exempt, nonprofit corporation. Since 2011, Golden Corral and its guests have provided nearly $13 million to Camp Corral. Through its annual Military Appreciation Night, Golden Corral has also raised more than $15.7 million for the DAV over the past 18 years and has served 5.7 million complimentary meals to military personnel.

About Golden Corral:
Golden Corral, based in Raleigh, N.C., is the nation’s largest grill-buffet restaurant chain with 491 restaurants operating in 41 states as of August 2019. Golden Corral is famous for its variety, including USDA steaks cooked to order, smoked meats, savory pot roast, hot yeast rolls, and desserts like homemade carrot cake and the Chocolate Wonderfall®.

About Camp Corral
Camp Corral, a 501 (c) (3) tax-exempt, nonprofit corporation, provides free, one-of-a-kind summer camp experiences for children of wounded, injured, ill or fallen service members. Since its founding in 2011 by Golden Corral, Camp Corral has grown to as many as 24 camps in 19 states and has served 24,000 children. Although any child ages 8 to 15 from a military family is eligible, registration priority is given to children of wounded, injured, ill or fallen military service members. For more information, visit www.campcorral.org.